The biggest change is a plan to convert a section of both The Corso and Darley Rd to one-way traffic heading north. The road will stay open to traffic heading away from the Eastern Hill, but close to traffic in the opposite direction. One side of the roadway will be replaced with a dedicated cycle path (image below) and the parking will be replaced with ‘parklets’ so cafes can spread out. The one-way road closure will run from the Whistler St car park to the intersection with Darley Rd and Wentworth St. 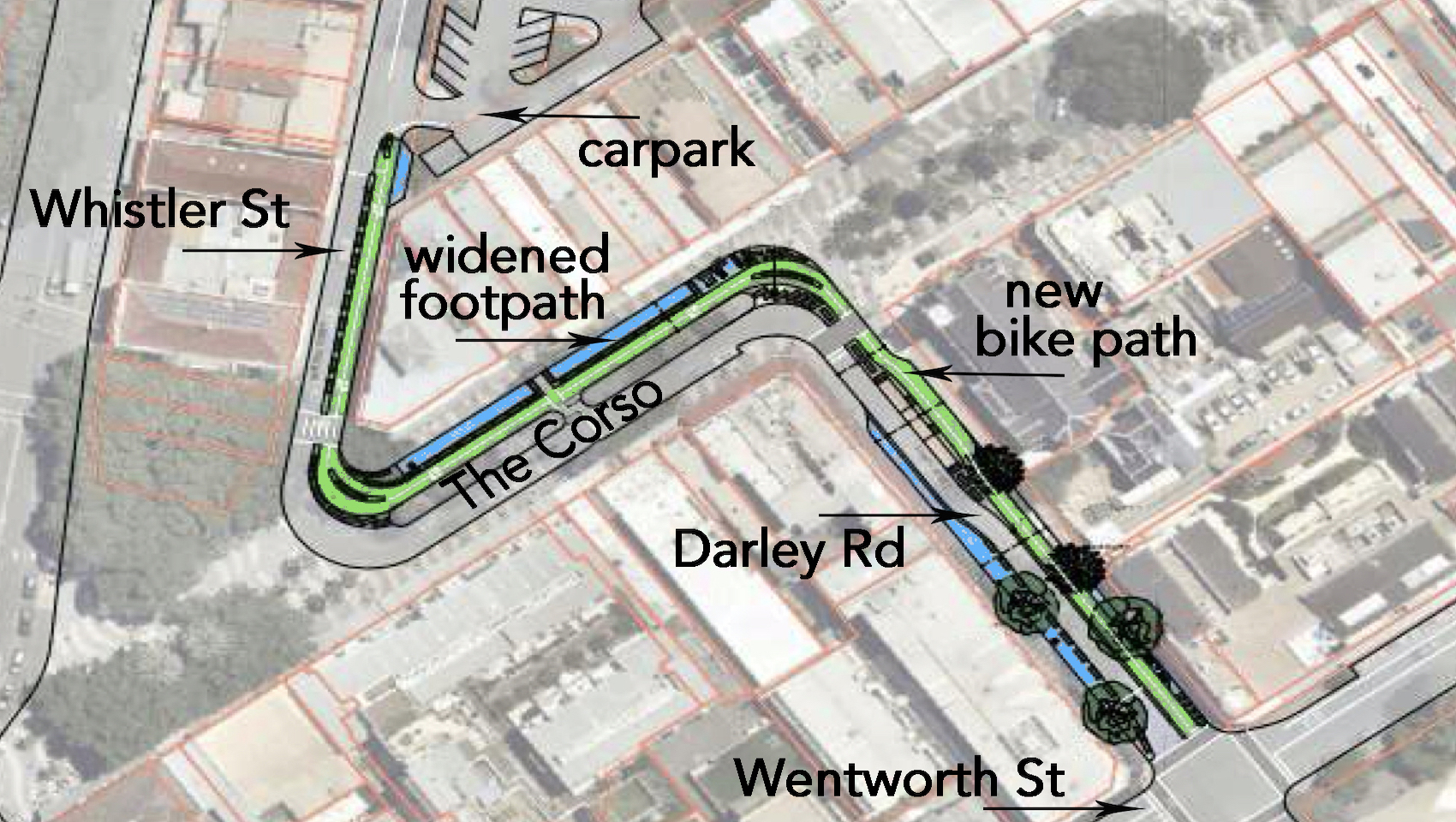 There will be a shared zone in Whistler St for one block north of the car park with a speed of 10kph. The cycle lane will resume along a short block of Sydney Rd and then Belgrave St as far as Raglan St, with both roads narrowed but no parking lost. (below) 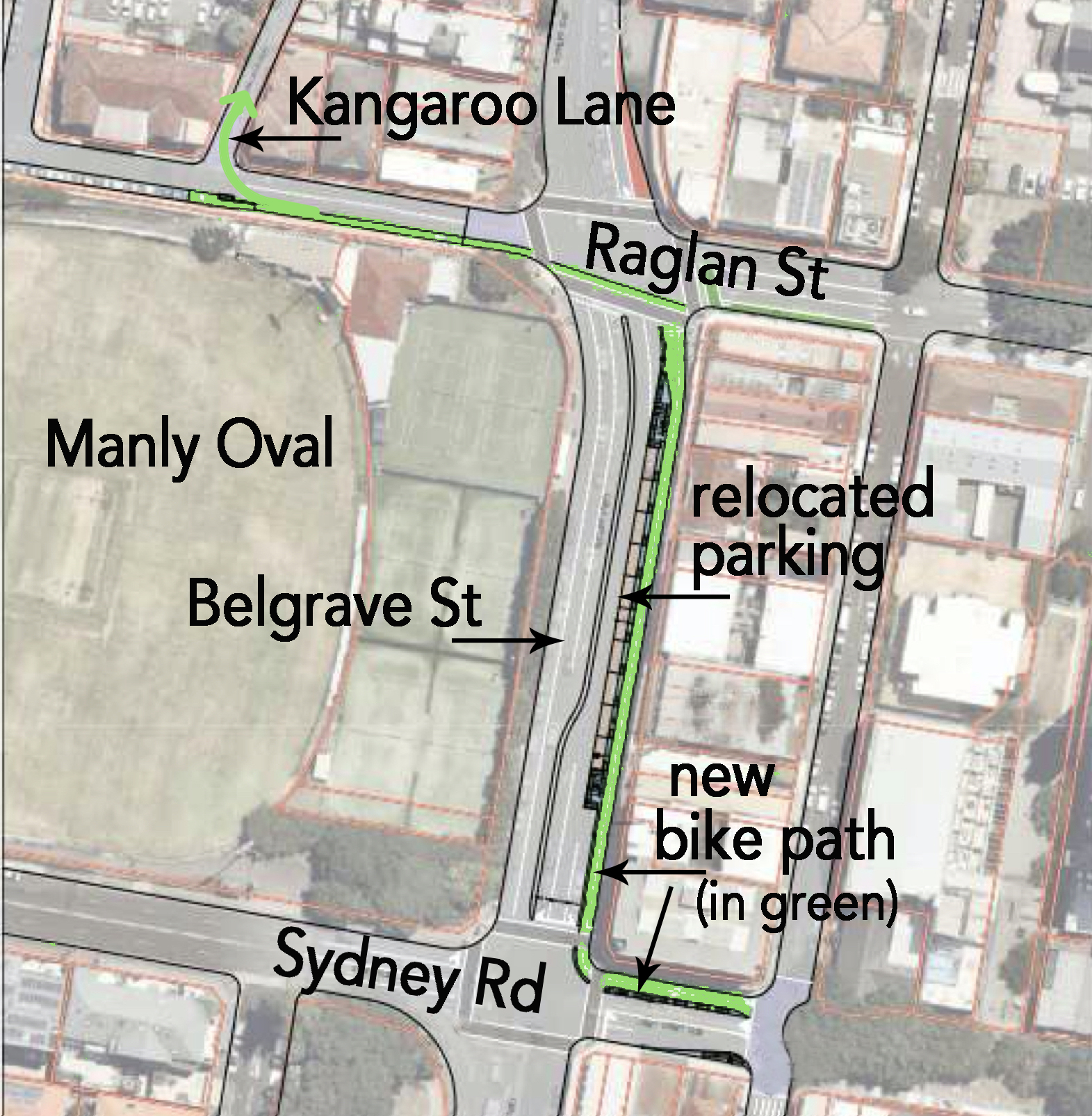 Three routes will still be open to leave the Eastern Hill, but only two for coming home - N/S Steyne and East Esp. Will that be enough?

Traffic analysis (done pre-COVID) showed that on the busiest day (Saturday), 3680 vehicles entered from Sydney Rd and travelled east along The Corso and Darley Rd. It is assumed that all this traffic would end up at the Wharf intersection, turning left from Belgrave St into East Esplanade. The intersection was assessed as being able to cope, meaning there will be no change to traffic light phasing and no other traffic work to make the remaining two routes to the Eastern Hill easier to navigate.

The ‘Activate Manly’ plan is a 12-month trial to improve access to the CBD by bike and on foot, and help businesses recover from the COVID-19 shutdown. The plan had been ticked off by the Traffic Committee, and has just been put on the Council’s Your Say page for comment HERE.

But the Council has already received a State Government grant, which will be lost if these changes, or similar, don’t go ahead. So only tweaks to the plan are likely.

Another problem is the corporate speak that has labelled this a ‘tactical urbanism project’ with incomprehensible aims, such as ‘enhance placemaking’.

There will be a new pedestrian crossing over East Esplanade near Ashburner St. This is a busy area for people crossing to and from Manly Cove, East Esplanade Reserve and the ferry. But it’s a dangerous intersection with a blind corner and traffic coming down fast from the Eastern Hill. The crossing will be raised, making it more visible to motorists as well as acting as a traffic-calming speed bump as cars enter Manly’s new 30kph safe speed zone. 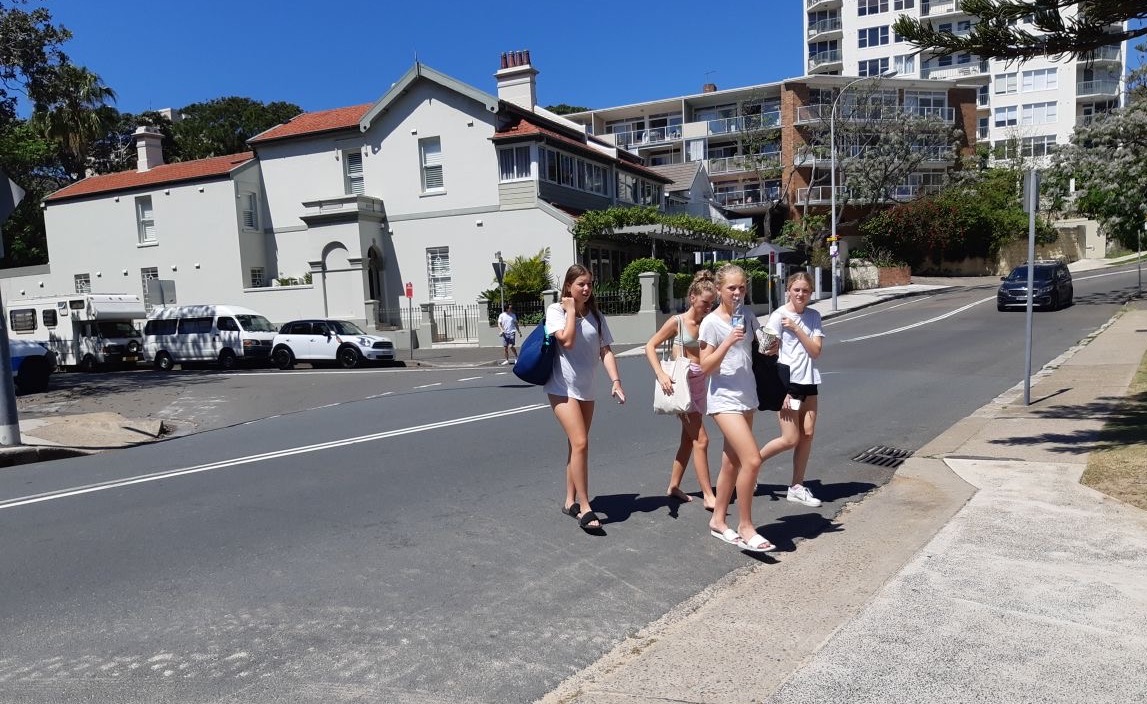 Another change on this street is that the existing crossing near the intersection with Victoria Pde will be raised. This is in response to community concerns that pedestrians on the crossing are hard to see and it’s an accident waiting to happen. The new raised crossing will act as a second speed bump on East Esplanade.

Although 30kph signs have been in place for some months, council traffic data shows cars are travelling at an average of 39kph along the street. While some people oppose the lower speed limit, East Esplanade is a short street, there are always pedestrians about and cars are usually queued back at the Wharf traffic lights anyway.

A pedestrian refuge will also be built on Cliff St near the corner with Darley Rd, as people feel exposed on the wide crossing as cars speed up Darley Rd and whip around the corner into Cliff St. The downside is that four street park places will be lost.

Please comment on the Have Your Say page on the Council website or call 1300 434 434, and advise the Forum.