European arrival at Kai’ymay (Manly Cove) “In January 1788, disappointed and concerned by the lack of fresh water and exposure to the winds at Botany Bay, Governor Phillip took a longboat to explore Port Jackson. When they approached Kai’ymay, they saw a group of 20 strong men wading out towards their boat. These men took the gifts offered and were curious about the boat, inspecting them closely. Phillip and the officers were impressed. Phillip later wrote that he named the place ‘Manly’ for their admirable manly qualities. First meeting with Aboriginal women Kai’ymay was also the site of the first meeting with Aboriginal women.

On January 29 1788, the British negotiated with an elder, and finally some of the younger women came forward. They stood by the boats trembling and laughing as the white men reached over to drape them with strings of buttons and beads. The English officers described them as ‘naked beauties’, who were ‘perhaps, inseparable from the female character in its rudest state’. So they renamed Manly Cove which became Eve’s Cove for a time.

Kidnapping of Arabanoo In December 1788 Governor Philip ordered the kidnapping of an Aboriginal man in the hope of forcing open a means of communication with the Eora. The kidnapping from the beach at Manly Cove was violent and distressing. The captive man remained silent, so they called him Manly, only later discovering his name was Arabanoo. “his friends attacked the boats as they pulled out, hurling spears, stones, firebrands, and whatever else presented itself … nor did they retreat … until many muskets were fired over them.” Watkin Tench, Marine officer “The terror this poor wretch suffered, can better be conceived than expressed; he believed he was to be immediately murdered.” Captain John Hunter Arabanoo was a dignified and gentle man who refused to play the role of cross-cultural envoy. He was kept a prisoner in Sydney, and after the outbreak of the terrible smallpox epidemic among the Eora, he nursed his stricken countrymen in Sydney’s hospital. He contracted the disease himself and died on 18 May 1789.

Kidnapping of Colebee and Bennelong In November 1789 Governor Phillip once more sent the boats out to kidnap Aboriginal men. Again they rowed down the harbour to the beach at Manly Cove, violently abducting two men Colebee and Bennelong. Colebee soon escaped from Sydney, but Bennelong remained, and proved receptive to learning all about the British, their language, resources and intentions. He and Phillip became friends and often walked out together, but after seven months, Bennelong escaped too.In April 1789 a smallpox epidemic broke out in Sydney. Europeans, including the colonists who arrived in Sydney in 1788, had developed some resistance through earlier exposure to the disease. However the local Aboriginal people had not and it decimated the population. “At that time a native was living with us; and on taking him down to the harbour to look for his former companions, those who witnessed his expression and agony can never forget either. He looked anxiously around him in the different coves we visited; not a vestige on the sand was to be found of human foot; … not a living person was anywhere to be met with. It seemed as if, flying from the contagion, they had left the dead to bury the dead. He lifted up his hands and eyes in silent agony for some time; at last he exclaimed, `All dead! All dead!′ and then hung his head in mournful silence.” David Collins, Judge Advocate of the colony, April 1789 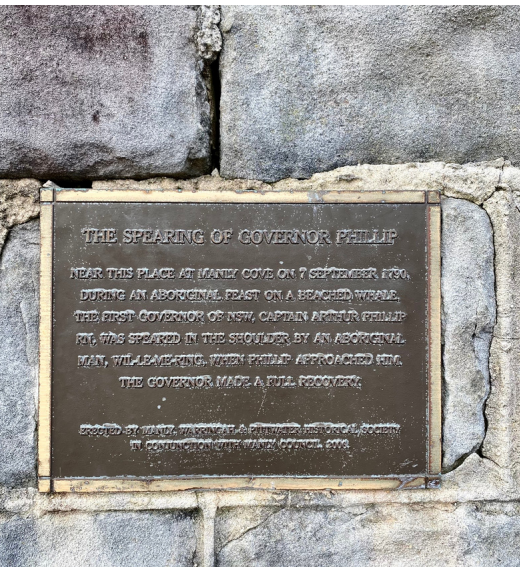 In September 1790, a whale washed up on the beach at Manly Cove and a large number of Eora gathered for a great whale feast. Bennelong summoned Phillip to attend. It was a happy reunion there on the sand of the cove, with gift giving and conversation. At some point Bennelong disappeared and a circle of warriors began to close in on Phillip. A stranger, a man named Willemering, seemed agitated and when Phillip began to approach him in his customary way, slowly, hands outspread, Willemering picked up a barbed wooden spear and hurled it at him with such force that it passed through his shoulder. The wound was non lethal. Historians suggest that what Phillip experienced was a payback ritual. Perhaps Phillip sensed something of this: much to his officers’ confusion and frustration, he refused to retaliate.